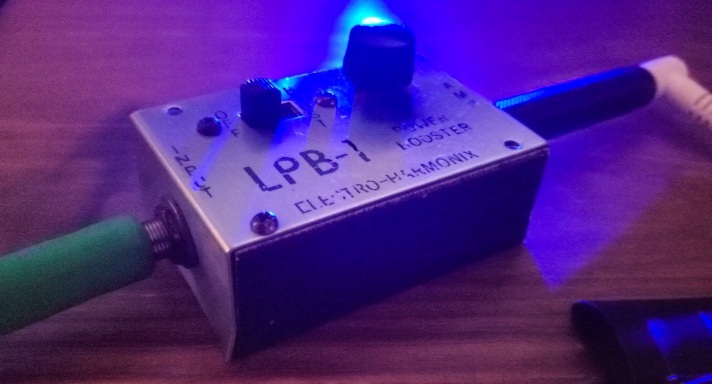 In 1967, a young musician named Mike Matthews was working at IBM (International Business Machines) in New York City when he was asked to take over production on a stompbox called “Foxey Lady” with Guild. He had recently finished a masters program at Cornell University EE and wasn’t exactly looking to get into electrical engineering, but made an obvious choice.

At an early age, Matthews showed a passion for business and claimed to take golf balls out of the course ponds to sell back to folks. By the time he was in college he managed many notable groups including Chuck Berry and The Loving Spoonful. This lead to a friendship between he and Jimmy James (Hendrix) and further interest in fuzz tones.

Before Matthews produced for Guild, Ed Sanner designed the FUZZrite for Mosrite and they put it on the market in 1966. Guild later rebranded the circuit in a different enclosure with the “Foxey Lady” graphics. Guild founder Alfred Dronge came up with the name based on Jimi Henrix’s tone from Are You Experienced? Matthews took over production with his first partner Bill Berko who was working on circuits at his own shop on 48th St.: ABCO Sound.

Berko made a few modifications to Sanner’s circuit but Matthews claimed to be unsatisfied with the work. Matthews took $1,000 of his own and changed manufacturing to AUI Instruments in Long Island, where he hoped to double his sales each year. He’d personally drive to Hoboken, NJ with the units, grab his check, and go back to make more. The stomp was put in a gray sheet metal box, complete with two knobs (volume and tone), on/off switch, and input/amplifier jacks. Even though this brand was not Electro Harmonix, an eager Matthews was about start a crucial tonal adventure.

In 1968, Matthews founded his own company, Electro-Harmonix, and began making Foxey Lady pedals himself. These were made with silicon transistors instead of the previous germanium and now had volume and fuzz knobs. Still branded “Guild,” they were far more impressive and looked ready for action. Not long after this, the “Axis” or “Axis Fuzztone” was produced and branded by Electro-Harmonix; making this the first official EHX (E-H at the time) product. Some of the Axis pedals may have had the same circuit as the Muff Fuzz.

Having not ever played a Foxey Lady or Axis, it appears that to power on the pedal you turn the volume switch clockwise while increasing the volume, much like old stereo receivers.

Worth noting for interest and coincidence! Jimi Hendrix used a pedal designed by his guitar tech, Roger Mayer. Mayer became a very prolific electrical engineer himself and designed many products including the Octavia fuzz. Although the Hendrix pedal was later called Axis Fuzz, it was not the same or related to Guild/E-H.

Bob Myer was introduced to Matthews through mutual IBM colleagues. Myer was an award winning engineer at Bell Labs. It’s worth noting that over the course of his life, Myer attained over 100 patents. He and Matthews joined heads to design a “distortion-free” sustainer. This pedal proved to be very expensive and complicated, so production on it was delayed and E-H went in a different direction. That distortion-free sustainer would eventually lead to the production and release of “The Black Finger.” During the trials of the prototype, Myer added a preamp to the unit and Matthews launched the Linear Power Booster 1 (LBP-1).

Here’s a clip of what I believe to be a 1969 LPB-1, that I purchased from Action Music in Falls Church, Va, using a 2016 Fender Jazzmaster and Orange Micro Dark purchased from Melodee Music in Sterling, Va. Melodee Music has been my go to music and gear shop since I started plucking, and I always look for an excuse to buy another guitar. The video also features a 1979 Big Muff Pi V5 Op Amp with Tone Bypass, purchased from Action Music, which is a great shop to get great vintage/new pedals, guitars, amps, and other gear. This thing is so far beyond awesome, but very finicky and strange. I attached a female adapter to use a longer cable instead of plugging directly into the amp. The signal flows from left to right which makes it tough to stick on a pedalboard. They were designed to stick directly into a clean vintage amplifier to add some drive. I haven’t had a chance to purchase or play any of the Axis, FUZZrite, or Foxey lady pedals yet, but hopefully soon!

“In those days, amplifiers were designed with a lot of headroom. There was no such thing as overdrive. So, you would turn them up to 10 and they would still be clean and loud. But with this device, you could make the amp much louder, but then overdrive it. I made that my first product. I called it the Linear Power Booster, or the LPB-1, in 1968” – 2018 Mike Matthews Interview with Brian Berk/The Retailer.

The first edition of the LPB-1 had the signal flow from right to left with the 1/4″ on the instrument side, so you could stick it directly into your guitar and have an instrument cable come out of the LPB-1 and into the amp. That way you could flip the booster on and off from your instrument and control the amount of drive with the knob. Like having a drive knob right on your guitar!

Although it was not a typical stompbox, this was considered one of the first Made in USA overdriven guitar “pedals.” The pedal had a off/boost switch, a gain knob, and did not have a footswitch. It had a single transistor so that it would not get too fuzzy or distorted, just boosting the signal to the amp using some drive. Unique and funky. This marked the first non-Guild associated product by Electro-Harmonix.

A two transistor version of the LPB-1 was designed by Myer and distributed by E-H called “Muff Fuzz.” It features similar qualities to the LPB-1 but with a warmer, fuzzier tone and a high controversial term for the time: “muff.” There it was in bright orange letters, made in USA, and gritty.

That’s it for now with the pre Big Muff fuzz, the next section of Big Muff History will focus on the Version 1 “Triangle” Muff. As a reminder, I am not an employee of Electro-Harmonix and writing these pieces for fun.

Shawn Hatfield is a writer, musician, producer, and publisher from Northern Virginia. He has released a full album, several singles, a book of poetry, and much more.